It has been 3 months and 27 days since Anna passed away..  118 days… 2832 hours… 169,920 minutes… And it still doesn’t seem real most of the time.  It has taken me until now to write this, after several prompts from Mum and a final word with myself.  Mostly because I wasn’t sure what to say, and also because I couldn’t be sure that what I do say will sound anything other than maudlin and melancholy, and that is NOT what I want.

It’s hard when people ask how you are… What do you say?

“I’m having a terrible day”?

The honest answer I always want to give people is “I don’t know”.  I don’t know how I am.  Good sometimes, OK others, and downright terrible at times.  It can change on an hourly basis.  I think my other half thinks he’s living with Jekyll and Hyde at the minute!

I think I am speaking on behalf of all of Anna’s close family when I say that.  It’s not just me who feels like life is happening around them.  We have good days and bad days (or should I say good hours and bad hours!).  We continue to share plenty of laughs but are definitely considering buying shares in Kleenex for the amount of tears we shed.  Though Mum said that Dad continues to buy the cheap tissues that are like sandpaper, which we know Anna would be laughing at! He’s always been a bit of a spendthrift (not the word Anna would choose ;-)), and yes he still owns a pair of trainers that he bought before Anna was born!!

Christmas was the marker we were all dreading.  Anna was always the jolly one at Christmas.  I’m the biggest scrooge going, my brother the biggest cynic, mum likes to keep things simple and low-key (doesn’t like the mess!), and dad doesn’t realise it’s Christmas day until someone presents him with a Christmas hat to wear when he wakes up!  Anna was like Buddy the Elf… She would start to get excited for Christmas from the previous Boxing Day! She was always the one who was great with the kids while I stood on the sidelines and watched (and drank the Buck’s Fizz because someone had to!).   Hence why we knew that our first one without her was going to be doubly tough. But we made it through, relatively unscathed, and even Enid (Anna’s gorgeous Springer) managed the day without pulling my Christmas tree down or licking the Christmas cake (yes this did happen the previous year…). 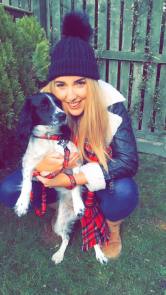 Enid has been our little saviour. She lives with Mum and Dad but we’ve all taken it in turns to look after her, and even though I curse Anna every time Enid runs through the house with muddy paws (I told Anna not to get a springer spaniel – they never. Ever. Get tired. Ever.), I think she gives us all a little feeling that Anna is still with us.  She’s part of our coping strategy I think.  Other coping strategies include talking to Anna’s photo, which Mum does every morning and every night (apparently there’s a lot of swearing, but I think that’s Anna’s potty mouth wearing off on her), watching old video footage of us as kids (mostly cringing at the haircuts but it brings back lots of happy memories), and we talk about her a lot.

We all keep reminding ourselves that Anna would’ve been the first one to tell us to get our backsides out of bed and get on with things. ‘It is what it is’ she would no doubt say.  She was always worried about how we would all cope when she died, but actually we have taken our cue from her.  She was diagnosed with a brain tumour at just 23 years old, yet still managed to make her last 20 months some of the best of her life. She lived, she loved and she laughed in the face of her awful prognosis, so who are we to mope about. 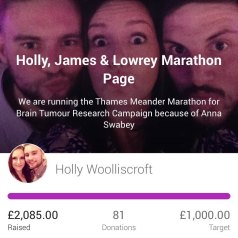 As a family we have all committed to continuing where Anna left off with her fundraising for Brain Tumour Research Campaign, and we are so grateful to the people who have helped keep her legacy going so far.  Our amazing friend and supporter Sarah (the superhuman lady who ran the multiple marathons and cycled half way across Europe for Anna’s cause last year) held a charity band night in York which we attended, and Anna’s school friend Grace organised a Christmas concert, both raising in excess of £500. Our family friend Sandra, who had lovingly baked Anna and Andy’s wedding cake that was sadly never to be, sold off some of the cake to raise £90 for Anna’s cause; and  our cousin Holly, her boyfriend James and their friend Lowrey ran a marathon, raising over £2000.  These are just the ones that spring to mind, and we know that there were many more singular donations, one of which came from our Great-Uncle Alan who was sadly too unwell to attend Anna’s funeral, and has since passed away, but not before donating £1000 towards brain tumour research in memory of Anna.  All of these amazing fundraising efforts and donations have grown Anna’s combined total to a huge £106k!!!!

It was always our intention to arrange another ball after the success of our Cinderella Ball in May 2015.  Anna was in her element organising everything and we talked at length about what our next one would be like.  And even though the main lady isn’t here to crack the whip and oversee everything, we are determined to make our next one a huge success.  So here’s a little heads up for those of you wanting to attend or donate raffle/auction prizes for our ‘Midnight in Paris’ Ball to be held at the end of March.  It will be in County Durham with dates/times/venue/ticket prices to be confirmed within the next week.  Our last charity ball raised over £5000 as we had some truly amazing raffle and auction prizes on offer, and some incredibly generous and supportive guests.  We are hoping that this year’s prizes will be just as fantastic and that we can raise as much as we can for research into the terrible disease that took our beautiful Anna.  So if anyone would like to donate prizes for raffle/auction on the night we would be most grateful and you can do so by contacting linda@loxoflove.co.uk.

Lastly, I just wanted to say a huge thank you to all of our family and friends who have supported us through the past few months, and who continue to do so.  The hardest thing for us is trying to adjust to life without Anna.  I have a million screenshots and saved pictures that I would’ve sent to her by now for us to laugh at, so I’m really missing that one person I can send all my stupid stuff to.  I don’t think most people would get half the jokes that Anna and I howled laughing at… It’s a sister thing…

Thank you again to you all and don’t forget our charity ball tickets will be on sale very soon!

From a very lost big sister,

I am 23 years old and have recently been diagnosed with a terminal brain tumour (It still feels bizarre when I write that down or say it out loud).

I have decided to start writing about my ‘brain tumour journey’, in the form of this blog “Inside My Head”.

Please join me on my journey...

I am Anna Louise Swabey, I am 23 years old and have recently been diagnosed with a brain tumour. (It still feels bizarre when I write that down or say it out loud).

I have decided to start writing about my ‘brain tumour journey’, in the form of this blog, “Inside My Head”.